0
was successfully added to your cart.

An Anniversary Party for a Man (Alain Ducase) and His Restaurant 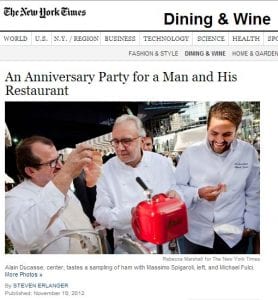 RENÉ REDZEPI said he was managing the economic crisis pretty well. At his little restaurant in Copenhagen, he said, laughing, he was getting 100,000 reservation requests a month. Of course, then it clicked: this unassuming young man of 34, lightly bearded, runs the hottest restaurant in the world, Noma.

And he was here, happily, along with 240 or so other chefs from 27 countries, to help honor Alain Ducasse, 56, the godfather of French cuisine, who invited confrères and consoeurs to celebrate his 25th anniversary running the three-star restaurant here, Louis XV. “I grew up with Alain Ducasse, reading his books, dreaming of going to his restaurants, and I’m still at the stage that I don’t really believe that I’m in the same category,” Mr. Redzepi said.

“What’s important is to keep such a high level for such a long time,” he added. “What happened to me is a bit freakish, but it gave me the freedom to cook what I want.”

His friend Magnus Nilsson, 29, who opened his Faviken restaurant in northern Sweden after four years in Paris at L’Astrance, said he thought his first invitation from Mr. Ducasse was junk mail, and it was not until a paper copy arrived that he believed it. “His restaurants have been around a long time, so people don’t talk of him in quite the same way, though they’re better now than ever,” he said. “And when you take away all the ‘chichi,’ it’s a business transaction: when you take their money, people expect pleasure in return.”

There was plenty of “chichi” here last weekend, with chefs coming from the United States, China, Japan and all over France, collectively holding some 300 Michelin stars, for a celebration including a lavish dinner that highlighted the vegetables, fish and game from the region. And there was plenty of what the British satirical magazine Private Eye calls “luvvies” — highly complimentary comments about a star from those in the same industry, including rivals like Joël Robuchon.

Guy Savoy, one of France’s finest chefs, many of whom came here to pay a kind of homage, said that “Ducasse shows us tonight that he’s the leader of French gastronomy in the world.” Only Mr. Ducasse could have gathered together so many distinguished chefs, he said. “His organizational talent is also extraordinary,” Mr. Savoy said. “Chapeau!”

The food at Saturday’s dinner, served to more than 400 people, was both regional and refined. Papery sliced raw baby vegetables of the area — 15 of them, including fennel, eggplant and spiny artichoke — were in a crystal glass to be dipped in an olive paste. Small gamberoni, or red shrimp, from San Remo were served with a seafood and coral aspic and a dollop of superb Chinese caviar. Then spelt with tiny artichokes and white truffle. Then local fish — red mullet, scorpion fish, John Dory, sea bream, tiny squid and octopus, in a light fishy broth. Then a small pastry filled with game birds and chard, with a pungent salmis sauce, vegetables and a truffle salad. Then a dessert of cooked apple and wild quince, with an ice cream made with cream from local cows and a touch of salt. And for those who could manage it, chocolates and a hazelnut shortbread.

All of which was accompanied carefully by an extraordinary selection of spirits and wines, including Dom Pérignon Rosé Champagnes from 1995 (never marketed) and 2000, a Dom Pérignon from 1993, Cheval Blanc 2004 and Château d’Yquem from 1988.

Mr. Ducasse becomes politely annoyed with the recent hoopla around Spanish and Scandinavian chefs, feeling it underestimates the creativity within the tradition of French cuisine. But he invited some of the best of the world’s chefs, from Mr. Redzepi to Michael White of Marea, Maguy Le Coze of Le Bernardin and Daniel Boulud, now of New York, as well as Patrick O’Connell from the Inn at Little Washington in Virginia.

There were some of the best from Japan, some of whom had trained with Mr. Ducasse, and from Beijing and Britain. And then there was Hemant Oberoi, chief chef at the Taj Mahal Palace in Mumbai, who quietly explained how he and his staff saved the lives of hundreds of clients on the night in November 2008 when the hotel was stormed by terrorists, and how he watched some of his employees die.

Mr. Ducasse is an admirer of other cuisines. He can rave for five minutes about “the perfect soba noodle” he had in a little dive at a Japanese train station, cooked over one gas ring. “Oh, and the result — perfect width, perfect texture, perfect density, perfect flavor, perfect temperature, perfect light — the essence of soba!”

He has a thing about temperature: of the food, the wine, the nuts at the bar. He talks about how fine cooking need not be expensive, rhapsodizing in an interview about “a perfect leek vinaigrette” and lamb shoulder, “the best part, but not a noble cut.” But he also believes that “fusion is confusion,” and that French tradition, and French training, remain the foundation of haute cuisine all over the world.

Tom Kitchin, of the Kitchin in Edinburgh, worked for two years with Mr. Ducasse, as did Clare Smyth, who worked four years here and is now the chief chef for Gordon Ramsay’s London three-star restaurant. Mr. Kitchin spoke passionately about France as “the home of gastronomy and of haute cuisine.”

In 1987, Mr. Ducasse, only recently recovered from an airplane accident that immobilized him for at least a year, was charged with creating a Michelin three-star restaurant here, at the Hotel de Paris. He was 30. It took him 33 months, and it was the first three-star inside a hotel.

After 25 years, he said, “it’s the age of maturity, both terribly long and terribly short.” But it is “not a place to stop, not a repose,” he insisted. “Now it’s important to progress.” His current theme is modernity: “less fat, less salt, less sugar, more local and seasonal products, less meat and more sustainable fish,” he said. “We must eat more durably and equitably.”

Amid all the talk, of course, there was the food and wine, which were a gesture of generosity to the community of chefs and guests, who included Prince Albert and his wife, Princess Charlene, and Princess Caroline. The Mediterranean market on Saturday showcased a stunning display of fish, vegetables, breads, cheese and wine, with some of the chefs making dishes that they had invented for the occasion using local ingredients (and, it should be said, quite a lot of truffle). Dong Zhenxiang of DaDong restaurant in Beijing, for example, took local lamb and marinated it in sesame and Sichuan spices.

One of Mr. Ducasse’s slogans is “simple, sain et bon” — simple, healthy and good. The weekend that he created for his colleagues was hardly simple and perhaps unhealthy. But it was most extraordinarily good.