0
was successfully added to your cart.

Loison: Innovations in the 2012 Christmas Collection 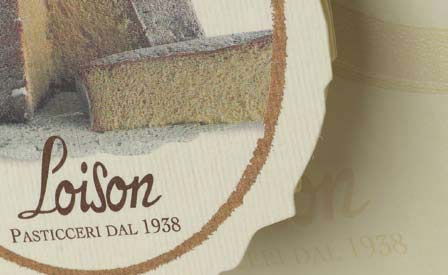 Like every year, Dario and Sonia Loison are proposing product and image innovations designed to create trends, against the backdrop of a catalogue that decimates the theme of the panettone cake with over twenty different proposals and a thought for the calendar beyond Christmas as well.

With a natural aptitude for excellence…
Dario Loison’s philosophy in connection with his products was developed along several important lines, which often come together with surprising results. Firstly, this means the choice of the basic raw materials, which are on a level of absolute excellence in the “Top” line, which covers three quarters of the catalogue, and are modulated in accordance with market demands in the “Pastry” lines, again of a very high level, and the “Extra Quality” line, with an eye on economy. Again with regard to the raw materials, the company has a privileged collaboration with Slow Food for the supply of exclusive ingredients, such as the Savona Chinotto orange, the Late Ciaculli Mandarin, the Cosentino “Dotato” Fig and the Bronte Pistachio. And there is more. In terms of typical Venetian products, the pastry valorises Prosecco spumante, but also a local hillside fruit – namely the sour black cherry, as well as products such as chocolate and glazed chestnuts, which date from the historical cafés. Finally, the company’s recent interest in recuperating the Venetian tradition of spices, which led to the Noël Panettone cake, inspired by certain cakes from Central and Northern Europe, but also by combinations that are highly appraised locally, such as the Apricot and Ginger Panettone and the Venetian Sour Black Cherry and Cinnamon cake.

An unmistakeable image…
Loison products are immediately recognisable, thanks to Sonia, who deals with the presentation of the products, in an exceptionally professional way and with great personal involvement. One constant in the Loison image is the nostalgia for the Belle Époque, when the pastry shops of the great European capitals expressed themselves on unquestionably refined levels, both in terms of the atmosphere of the environment and the elegance of the product presentation. From year to year, Sonia develops a particular aesthetic theme, suggested by her own spontaneous inclination towards romanticism, orienting the more than twenty Christmas product lines in the same direction. The 2012 collection, for example, is characterised by a trio of
extremely evocative colours – ivory white, Venetian green and antique red – in intense tones, suitable to confer warmth to the holiday season table, but in vintage artistic paper, as if they were covered by a fine dusting of powder, almost a preview of the first snow. The packages reproduce antique fabrics with floral decorations, Victorian friezes and lace, with a profusion of refined ribbons and golden decorations that confer a seal of elegance to every gift package.

Beyond Christmas.
The panettone is a Christmas cake par excellence, but when it is introduced onto the market as “Italian Cake”, the tradition of being a “Christmas” cake is felt less. Thus, given its great success abroad, Loison’s showcase includes several presentations that go beyond the typical colours and symbols of Christmas: elegant packages, suitable for an anniversary gift or an invitation to dinner, with the pleasure of being able to find some personal or domestic use later for the boxes and containers. That’s how the inclusion in the catalogue of the “Venetian” is to be interpreted. It is truly a cake for all occasions, with the aroma of spices and studded with  grains of sugar and almonds, bearing the image of elegance and gaiety of the city of the Lion of St. Mark and the Carnival.